As I said before (and over and over again), I love saitom’s artworks thanks to Xenoblade Chronicles 2, in which he is credited as the main character designer: Saito Masatsugu1)Maybe his real name. saitom is chiefly for doujin activities.. In the last post, I wrote about the B2 tapestry exclusive for TORANOANA, and this time let’s take a look at the one only for melonbooks.

Excluding DF, which costs 1,404 yen, the tapestry would be 2,700 yen. That means the price is the same as the one for TORANOANA.

Now let me take it out of the box! Click here to see the pics.

This is the cardboard box that contains DF and the tapestry.

but the box needs to be large enough, and that makes sense.

So opening it up…?

“N-no wrapping! I mean, the girl is wearing clothes actually, but the book has nothing on!!
The DF means default, I guess?”

It’s my first time ordering from melonbooks, but I thought they should’ve tried a bit harder.
Aside from that though, proceed to unwrap the paper. Yes, this one is in a proper package!

Neko, maru, and shoten mean ‘cat(s),’ a ‘circle stamp,’ and ‘shop or store’ respectively.
It follows that nekomaru-shoten is a shop with its logo written as a cat in the Chinese character, but not that they have an actual icon or signboard.

The illustration is perfect. It’s not saitom’s fault, but every time I get something like that, the item in a photo is somewhat different from the actual one.

The tapestry features the Covergirl of DF.

Don’t you think something is going wrong?

I don’t have many tapestries to show off, so this might be wide of the mark, but the string seems too LONG.
Oh, man. It’s obviously long, at least the longest among any other ones I’ve got.

To make it short I tied the upper part of the string, but it’s still surplus to requirements.

Why are they reflecting the light?
Because I put them in poster sleeves for protection. 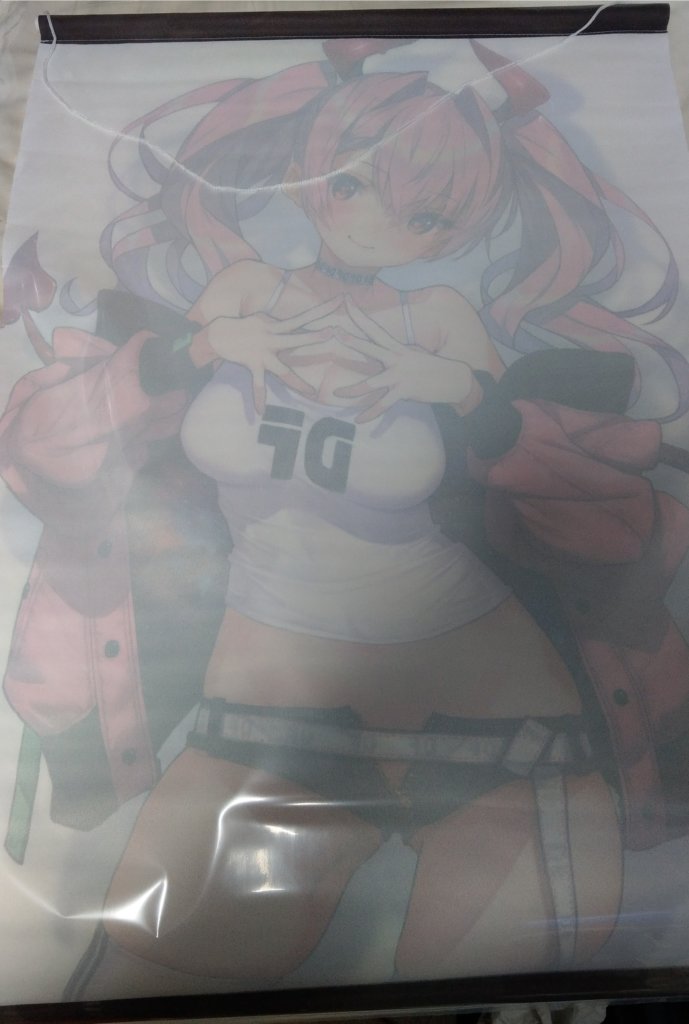 Although it’s not to be seen in the pics, there’s another problem. The poles are sticking out excessively through their holders! The tapestry is seemingly inferior to the TORANOANA one except for the quality of printing.

I have no idea how they produce those tapestries, but still, they should make bigger efforts to make it long enough for the product without cutting corners. I do believe TORANOANA can do it, so can Melonbooks,…well, I think.

Based on the cover

You could see her nipples through clothes on the last page if you had DF, but not on the cover instead. This tapestry looks designed according to the cover illustration, so they’re invisible. I felt less reluctant to display it, but deep down disappointed a little bit, too.
I’m not sure I should attribute it to Melonbooks or saitom.

For those interested, please get your hands on the doujin.

I put the link for the item page.